Well, the Swedish and Norwegian navies, as the two were bound in a Union at this time, under the same king. Norway had its own laws, and armed forces, but was very much the junior partner, foreign policy, for example, being decided in Sweden. The king, of course, was Swedish.

The main foreign threat, at least from a Swedish perspective, was Russia. Finland was under Russian control, and with the Tsars being fiercely expansionist to the East and South,  why not to the West? Finland had been Swedish until taken by the Russians in 1809, and this still rankled. In 1853, Russian had closed the border and was showing an unhealthy interest in the Finnmarken, the area right at the top of Norway. In turn, Sweden considered joining the Anglo-French Alliance in the Crimean War, primarily with the aim of of re-taking Finland and the Aland islands, but while the British were keen, the French were not so much, and the war ended before anything could be decided. 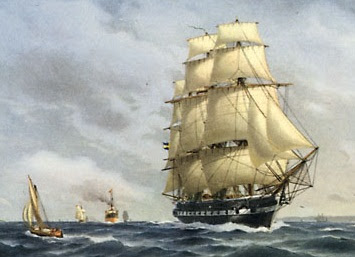 An emerging threat was Prussia. In the interests of Scandinavian solidarity, a joint Swedish-Norwegian  task force had been offered to Denmark in the first Danish-Prussian war in 1848, although it hadn't taken part. King Charles XV offered military support again in 1864, only to have his offer vetoed by both the Swedish and Norwegian parliaments.

The principal base of the Swedish navy was at Karlskrona, rather than Stockholm, not least because Karlskrona was ice free in the winter and in an excellent defensive position. It was protected by extensive defence works and two large forts, which are still on show today. The main Norwegian base was at Karjohansvern, near Horten.

Hans Busk in "The Navies of the World" (1859, a google ebook) comments that "Considerable attention has been bestowed of late years in improving the materiel and the personnel of the Swedish Navy. The materiel is now also in a very perfect state of organisation." "It comprises 1 rear-admiral, 1 commandant, 3 captain-commandants, 12 captains, 12 lieutenant-captains, 24 lieutenants, and 33 sub-lieutenants, together with 350 petty officers and marines, (46,000 men comprising 20,000 Swedes and 13,500 Norwegians)." 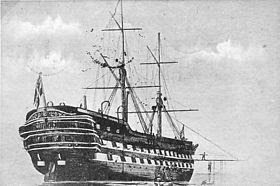 This was a time of transition for the Swedish navy, as for many others, as can be seen by the ships ordered.

HMS Valkyrian (1852) - a Swedish steam corvette, built by Karlskrona shipyard. She was built of wood, had three masts and could hoist 489 m² of sail. By 1872 she was disarmed and relegated to a transport ship.

HMS Oradd (1853) - "Fearless", a steam corvette. Returning from Le Havre, where she had been delivering exhibits for the 1866 Paris World Fair she was wrecked at Dungerness Light House, on the 3rd of December, with the loss of 12 men. 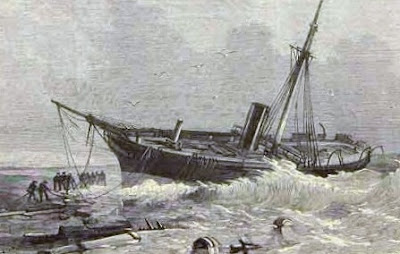 HMS Hogland, Svensksund, Carlsund, Motala, Aslog, Astrid, Alfhild and Inggerd (1856- 62)  - "2nd class" gunboats, built at the Motala shipyard. They were built of wood and steel, and equipped with two masts with up to 270 m² of sail. Between 1866-1867, the two 226 mm mounted guns were removed and replaced with a 96 mm gun and got the sail area increased. At this point they had a crew of 31 men.

HMS Stockholm (1856)  - a ship of the line, steam and sail powered, her propeller could be hoisted inside the ship for shallow water. She carried 62 x 30 pounder guns, and 6 x 7.62 inch bomb cannons

HMS Vanadis (1862) - the first and only steam frigate, with three masts, one 46m tall, and 1,643 m2 of sail. Although almost obsolete in one sense, she proved to be remarkably useful in another. Like any navy, one function of  the Swedish was to show the flag, so in 1869 the Vanadis was Sweden's representative at the opening of the Suez canal. In 1878 she collected the last governor of Sweden's only Caribbean colony, Saint-Barthélemy, before it was handed over to France and in 1883-85 she circumnavigated the world, making extensive scientific surveys of magnetism, hydrology and more.

The 1862 battle between the Monitor and Virginia send shockwaves through the naval world, not least in the Baltic where it was quickly realised that the comparatively calm and shallow seas ideally suited "monitors". Here Sweden hit the jackpot, as the designer of the USS Monitor was a patriotic Swedish expat, John Ericsson. who was happy to share his designs with his homeland. The Swedish Navy sent over Lieutenant John Christian d'Ailly, who returned with an improved Monitor design. The first ship built was christened HMS John Ericsson by a grateful nation.

The five ships of the John Ericsson class were designed for coastal defence, though a squadron was sent on a visit to the Russian naval base at Kronstadt in 1867, partly in the spirit of international fraternity, partly no doubt to demonstrate that the Swedes could come knocking at the door if the need arose. Otherwise they stayed in coastal waters, and in fact were only commissioned for 2-4 months every year during the summer and autumn. Depending on the political as well as atmospheric climate, some years they were not commissioned at all, the Tirfing was only active in 1867, 1873, 1880, 1885 and 1888–89 and the First World War.

The John Ericsson was armed with two huge 381mm Dahlgen guns which fired either a 200kg solid shot or a 160 kg explosive shell. In 1877 these were supplemented with a pair of 12mm machine guns. The other ships in the class were the Thordön and Tirfing (2 x 267 mm smoothbore guns), the Mjølner (2 x 270mm Armstrong guns) and the Loke (2 x 240 mm). The Loke, launched in 1871, made only seven short cruises in her whole career, being placed permanently in reserve in 1880. Despite their shallow draft the Thordön and Mjølner both aground at some point in their career, the Mjølner  only being freed when her ammunition, iron ballast and 120 tons of coal were removed.

Meanwhile, the Norwegians had been designing ironclads themselves, launching the HNoMS Skorpionen (2x 267mm guns), in 1865. Plans to build more Skorpionens were abandoned and the Mjølner above was paid for, and used by, the Norwegian navy. However the Norwegian HNoMS Thor, built in 1872 was basically an improved Skorpionen.

As with any new technologies, trial and error is needed to perfect the design. HMS Garmer (1867) was designed as a smaller version of the Monitor, for island archipelagos and inland waterways. However, her single 267mm gun had to be aligned with the hull to be fired, which was not very practical. Another river  monitor, HMS Skold, (1868, 1 x 267mm smoothbore) had a novel engine arrangement whereby she could be powered entirely by the muscle power of her 24 man crew, sitting on benches using a levers and crank system to move at all of 2 knots. The system was not used elsewhere.
Posted by Nelson at 13:58